Free Shipping on Orders Over $50 Within Continental USA

Free Shipping on Orders Over $50 Within Continental USA 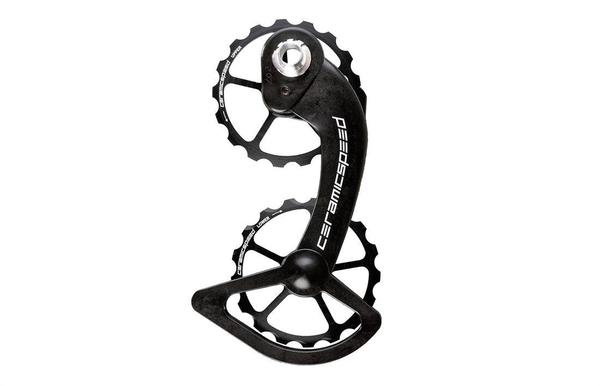 This item is currently not available.

CeramicSpeed’s dedication to reducing bearing friction has taken a big new step in the friction-free direction. It is their Oversized Ceramic Pulley Wheel System for Shimano derailleurs. It will work with all 11- and 10-Speed Shimano Dura-Ace and Ultegra derailleurs, both mechanical and Di2.

Rather than accept the industry dictating the size of derailleur pulleys, they decided to determine which size would be ideal. They determined that seventeen-tooth pulleys would not only dramatically reduce friction, but keep shifting performance crisp. Because such pulleys are too big to fit in conventional pulley cages, they also had to design the cage system, which is made of carbon reinforced polyamide. Even with the oversized aluminum pulleys, larger bearings, and oversized cage, the total weight is only 55g, which is only 10g more than what the standard Shimano bearings and cages weigh. And even with the increases size of pulleys and the custom cage (carbon-fiber, of course), the rear derailleur, which is designed to accommodate 11-28 cassettes

In terms of aerodynamics, there is no aero penalty. In some cases, at some yaw angles and rim depths, there is actually an aero gain.

The benefit these pulleys bring you is a savings of 2.37 watts over two 11t Dura-Ace Pulley wheels. Or, if you prefer to think of frictional losses, the CeramicSpeed System costs only 1.43 watts in terms of drag, whereas the Dura-Ace system costs 3.8 watts. The larger pulleys spin at 65% of the speed of smaller pulleys, which further helps increase durability of the system-CS bearings already last three to five times longer than standard Dura-Ace pulleys. And when the day comes that you realize you’ve worn out these pulleys, CS has replacements at the ready.

The heart of the system are CeramicSpeed’s standard hybrid ceramic bearing. CeramicSpeed utilizes Grade 3 Silicon Nitride balls that possess the best possible surface finish and roundness. In testing, the balls are 400% smoother, 128% harder, and 58% lighter than standard steel balls found in most bike components. They’re more than 100% smoother and 15% harder than standard ceramic balls. The balls are installed into hardened steel races in dust-free clean rooms and then checked again before assembly is complete.

As you can imagine, installing this system is a bit more involved than replacing pulleys. Rest-assured, it is more straightforward than it looks. You’ll need a Philips head screwdriver and a set of Allen keys. You can perform the installation on the bike or off, though on makes the installation a bit easier. You’ll probably also need a few more links in your chain, so starting with a new chain might be the easiest way to begin.